News Csíksomlyó, the Celebration of Religious and National Identity

Csíksomlyó, the Celebration of Religious and National Identity

The Csíksomlyó Pilgrimage turned 455 years old this year. Each year during Pentecost, tens of thousands of pilgrims travel to the Csík Basin to honor the miraculous Virgin Mary statue in the district’s Franciscan church. Hungarians from all over the Carpathian Basin come to Csíksomlyó to deepen their faith and experience the heartwarming feeling belonging together. 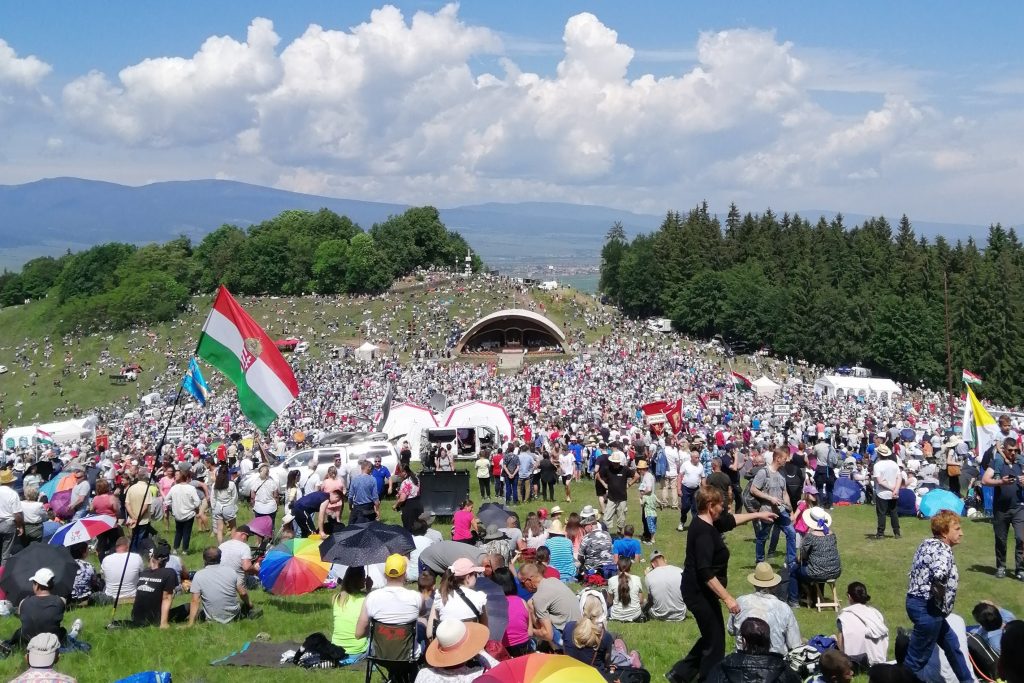 This year’s Pilgrimage was a very special occasion. There was an overlap on the date of Pentecost and the anniversary of the Trianon Treaty. The last time this had occured was in 1949. Besides this, all the pandemic restrictions have been lifted this year, so everyone could be present at the occasion freely. These two factors resulted in the incredible number of 350,000 visitors at the grand mass on Saturday. 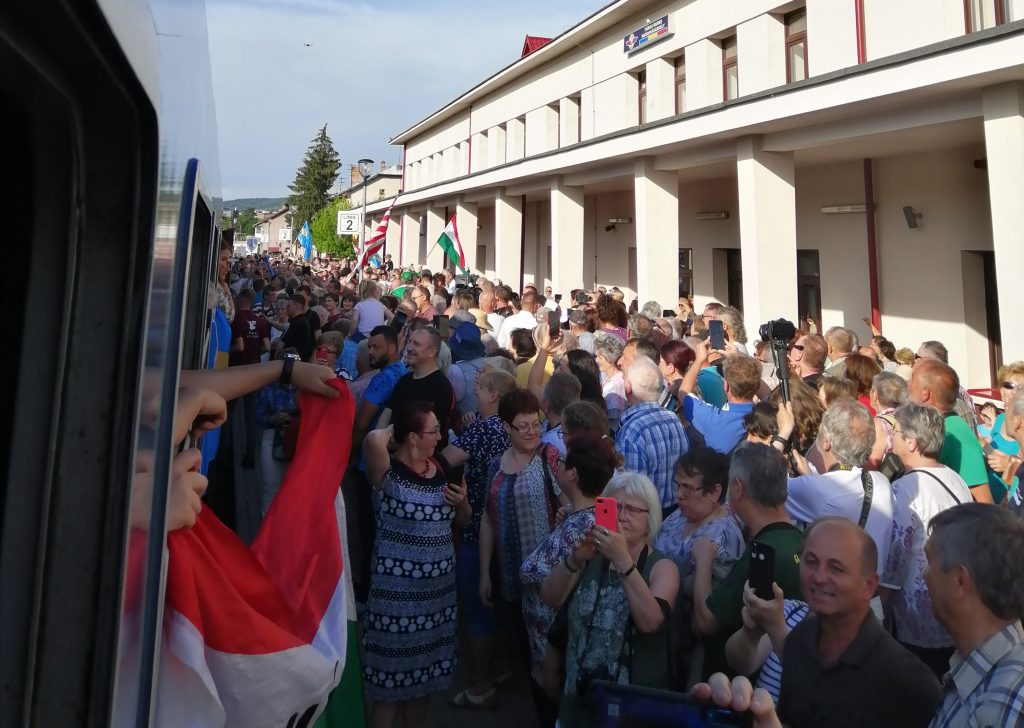 There are many means by which Hungarians from all over the Carpathian Basin set off to Csíksomlyó. Some travel by bus or wagon, others by foot or even on horseback. Yet probably the most iconic way to get there is by train. The pilgrim train started off its journey from Budapest and stopped at numerous towns throughout Hungary and Transylvania. During this long trip, locals awaited the arrival of the train at every stop. The arrival to Marosvásárhely was probably the most uplifting and emotional experience. As the train came near the station of Marosvásárhely, hundreds of Hungarians started cheering, waving and singing loudly to welcome the passengers. When the train stopped, a brass orchestra started playing traditional Hungarian tunes and the locals began handing flowers and small gifts to the pilgrims. Following this, there was a welcoming ceremony with local Hungarian folk dances and songs and a warm welcoming speech from the town’s mayor and religious figures. It was also common to see people smiling and waving as the train continued its journey along the towns and the countryside. This experience had left us with a sense of homecoming. 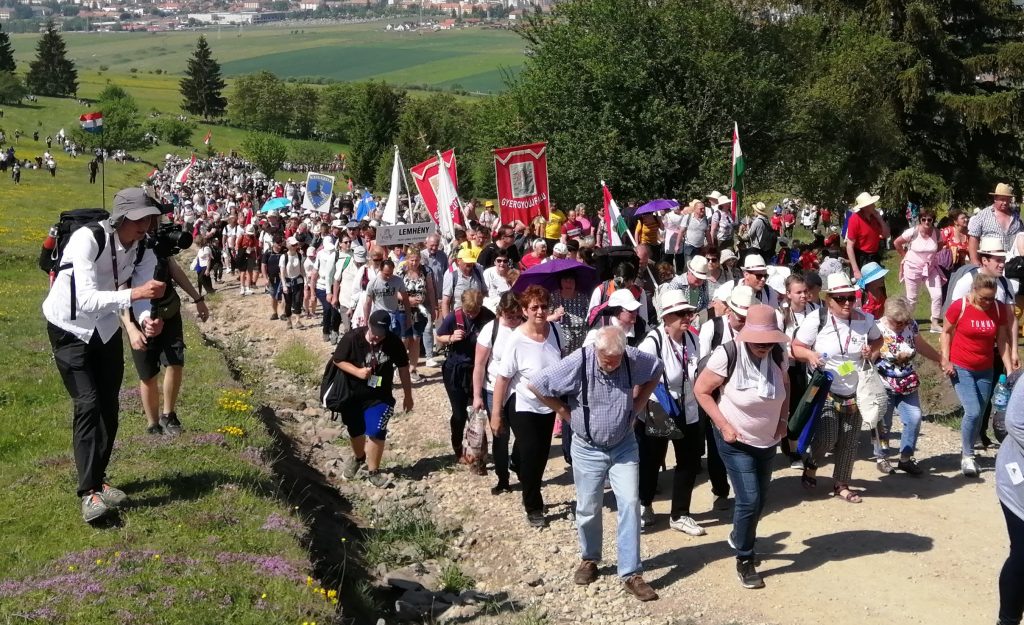 Before the grand mass in Csíksomlyó, people from around the region began marching towards the place of worship. It was amazing to see all the Székely and Csángó Hungarians march and chant religious chants and folk songs while wearing their traditional folk costumes. It was especially touching to see the Csángó Hungarians of Moldova, who have had to fight for their national and religious identity for centuries, even to this day. 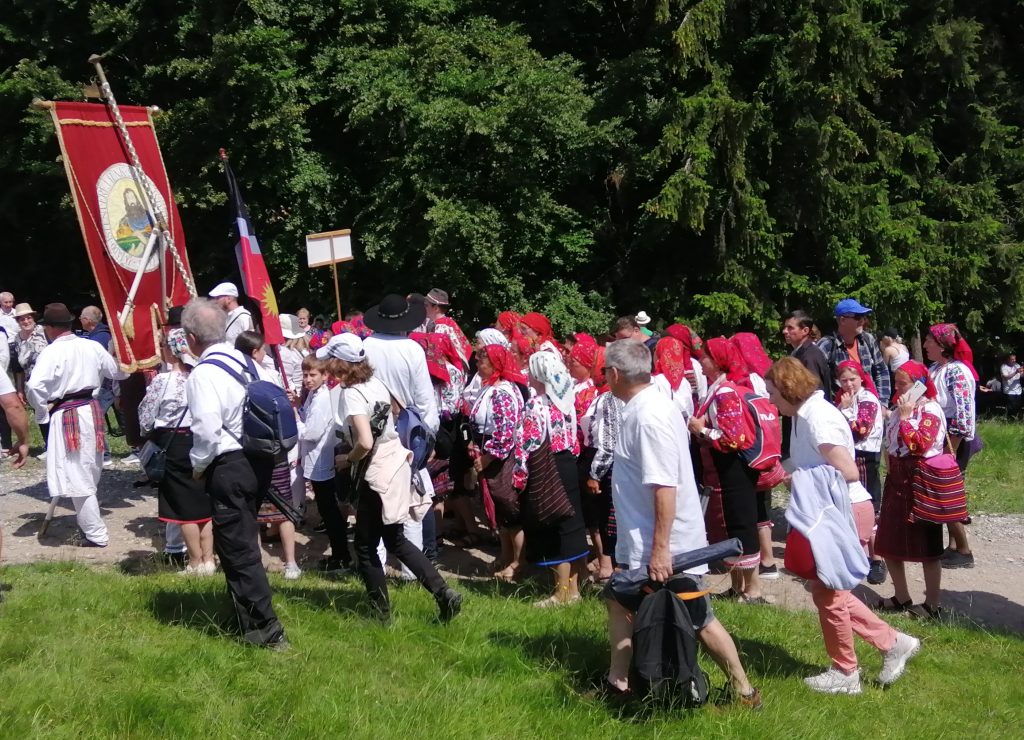 ’Pax et bonum’. Peace and Goodness – states the motto of the Franciscans. This motto has been the focal point of the whole occasion. The message of peace is particularly relevant in today’s day and age. In his sermon, Archbishop György Udvardy of Veszprém emphasized that peace must not only be coveted, but also created, and for peace, risks must be taken. The message of peace is not only relevant in connection to the war that’s currently raging close to our borders, but also the peace that we have to cherish and constantly work on among ourselves and the neighboring nations. In this sense, Csíksomlyó is a beacon of peace, where Hungarians come together to celebrate their religious and national identity, and despite living in numerous countries, the sense of belonging together crosses all bridges and borders.

Not many words can describe how it felt to sing the Hungarian and Székely anthem while being part of a crowd of 350,000. It truly was a moment of awe, national pride and gratitude.

Text and photos by: Tóth Máté