A series of article by Józsa Tamás 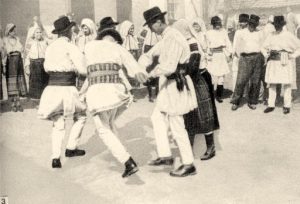 When it comes to getting familiar with archive dance recordings we already know where to choose from and what to look for. Speaking of the “what” part we outlined the classification of Hungarian folk dances in our last piece, which we divided into two aspects: geographical (dance dialects) and historical (dance types). In this article we would like to talk more about the historical approach and give you a closer look at the immensely exciting and colorful palette of Hungarian folk dances. Be prepared for a journey through time. The main point of our topic is to show that the dances had been passed down from generation to generation which is why we find traces of centuries-old dances in our folk culture even in the 20th century.

We begin our adventure in the late Middle Ages, early Renaissance when the dominant dances were circle and so called chain dances throughout Europe (e.g. carole, branle). In the Hungarian folk culture, the most important representatives of this type are children’s games, women’s circle dances (“karikázó”), both accompanied by singing only, dramatic dances (i.e. related to folk customs), and instrumental versions of chain and circle dances that are a significant part of the dance culture of Eastern Hungarian ethnical groups (“csángó-s” from Gyimes, Moldva and “székely-s” from Bukovina). Because of the fact that the dancers are tightly holding on to each other to form a line or a circle, and the steps and motives are homogenic, there is little room for improvisation. In some cases there is one person who leads the other dancers. See the links below for examples.

The first example is a “two-in-one” because first we see a chain dance which is basically a game, and a dramatic dance related to spring folk customs followed by a women’s circle dance and another game at the end.

The next dance type that we look into are shepherds’ dances with props. These dances find their origins in historic dances with weapons such as a sword or an axe. Such dances can be found all over the world. In the Carpathian basin their historic counterpart is the so-called “hajdútánc”, which is a fighting-military dance from the 16th-17th century. According to historic sources, its characteristics are the virtuous spinning of the weapon, acrobatic elements such as jumps and squats, large-scale improvisation, and movements resembling  a real fight. The dances are performed solo, in groups, sometimes in pairs with women, and sometimes even without the weapon or prop. This archaic dance is the antecedent of our shepherds’ dances and dances with props used to showcase specific dance skills. They differ mostly by the type of prop and the way the props are used during the dance. The former predominantly uses a stick as the prop (“botoló”, bot=stick) and the most representative examples are the ones kept alive by shepherds and romani people from the Eastern and North Eastern parts of Alföld (Great Plain). They preserved the fighting character of the weapon dances in their movements. The set of leg figures and steps are those of the “verbunk” (a dance type that appeared centuries later, which shows how interconnected these dances are). Let’s look at some examples from the Szatmár region (Central dialect)

The next example is a romani clip in which the fighting character is  conveyed even more than in the Hungarian one. It is also fascinating that a woman takes part in the “fight”, as if she was trying to keep the two fighters apart. It may remind us of that version of the historic “hajdútánc” which is performed in pairs.

As an extension of the above discussed dances, dances with other props are also part of this dance family. What changes is the prop and accordingly the character of the dance. The sword or the axe is replaced by a broom, a hat or kerchief, or even a bottle placed on the head, consequently the dance loses its fighting character and showcasing certain dancing skills becomes the main function. In these versions the props are either placed on the floor in an X-shape, are partially held but touching the ground, or just held in hand. We see less spinning movements and more jumping above and across the props, tucking them under the legs. The leg movements of these dances are mostly those of the jumping dances (“ugrós”) contrary to the connection of the “botoló” with the “verbunk”. Basically, these dances are the much more tamed, softened versions of weapon dances.

We have only introduced two dance types here. Next time we will head further in time discussing other types of the old dance styles, always highlighting the historic roots and the connections between different centuries, showcasing more examples from the archives. To be continued…