SARJÚ BAND, a young folk band popular in Hungary, will start a 10-day American tour at the end of October 2021. István Berecz, folk music director of the Fonó Music House, and Diána Santana Cadena will also accompany them. The two will participate in the dance houses in the role of dancers and instructors. The tour is the first important trip for Sarjú Band, taking them to communities of the Hungarian diaspora in the Northeastern part of the United States. The hope is that after a long period of isolation due to the COVID-19 pandemic, they will help to restart community life. The tour is made possible by the Hungarian Csoóri Fund, the Liszt Institute, the Hungarian Cultural Institute, New York, the Embassy of Hungary in Washington D.C., and the Gábor Bethlen Fund in Hungary, as well as by contributions from local supporters. During the twelve-day tour, covering approximately 4000 kilometers (2500 miles), eight shows and dance houses will take place, the primary goal being to meet with American Hungarians and interested Americans to share the music, song, and dance treasures of Hungarian folk culture. 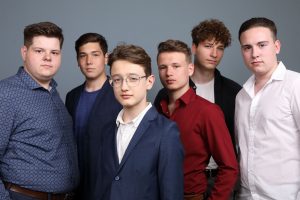 In 2016, the young musicians of SARJÚ BANDA won first place in the category “Band of the Year” of the “Fölszállott a Páva” (“The peacock has taken flight”) a televised national talent competition in Hungary. Their mission is to learn and preserve authentic Hungarian traditional folk music, striving to bring the heritage of old village masters to life on stage and in dance houses.

The band has a special relationship to the United States.  First violinists László and Balázs Hajdu-Németh were born in New Brunswick, NJ, as third-generation American-Hungarians. In 2013, their family moved to Budapest. Since then, they have been studying Hungarian folk music at the Óbuda Folk Music School. During summer vacations, they have regularly visited the U.S. and attended the Csipke folk music and dance camp. Besides working on improving their musical skills, they meet with old friends and the American-Hungarian community, which will always remain dear to their hearts, wherever they may live in the future.

DIANA SANTANA CADENA, is an architect of Hungarian and Ecuadorian descent and dances with the Bartók Folk Dance Ensemble of Budapest. In 2019 she received a Kőrösi Csoma Sándor scholarship from the Hungarian Government, allowing her to share her talents with the New Jersey community.

LÁSZLÓ HAJDU-NÉMETH (violin) was born in 2005 in New Brunswick, New Jersey, but has lived in Budapest since 2013 when his family relocated there. He is currently a student of Attila Horváth at the Óbuda Folk Music School, majoring in folk violin. He also studies classical violin and technique with violinist Ernő Oláh. In addition, he is a member of the Angyalföld Vadrózsa Folk Dance Ensemble.

BALÁZS HAJDU-NÉMETH (violin) was born in 2007 in New Brunswick, New Jersey.  He is studying folk violin at the Óbuda Folk Music School. Since 2015, he has been a member of the Angyalföld Vadrózsa Folk Dance Ensemble.  In 2019 Balázs and his sister, Ilona, made it to second place in the finals of the “Fölszállott Páva,” Hungarian televised talent competition, in the Solo Dance category, and received a Special Award.

TIBOR GÁL (vocal) attends the Béla Bartók Music and Instrument Making Secondary School of the Liszt Ferenc Music Academy in Budapest where he is a dorm student. His major is folk singing and folk violin. He began voice training at the age of 10, with Brigitta Török Ábrahám. In 2015, he was named the “Male Voice” of the year at the “Fölszállott Páva,” Hungarian televised talent competition.

SZABOLCS SZILÁGYI (viola) began studying violin in 2010 with Bence Márton Kovács in Tordas; subsequently, he was accepted to the Béla Bartók Vocational High School of Music, where he continued his studies under the guidance of Attila Mihó. Since 2019, he has been a student at  the Liszt Ferenc Academy of Music, majoring in folk viola-folk violin. Péter Árendás is his viola teacher.

BENDEGÚZ CSOÓRI (double bass) was born into a family of musicians. His father, Sándor Csoóri, has been teaching him and taking him to play music on a regular basis since he was five years old. He started his music studies at the School of Folk Culture in Üröm.  He currently attends the Bartók-Pikéthy Music High School in Vác. In addition to folk music, he also studies classical bass with Jenő Puporka and Sándor Benyus.

ÁRON HORVÁTH (cimbalom) was born in 2004, first encountering music at the age of three and started to play the drums at the age of 6. When he was 7 years old, he played the drums at an event in his hometown when a cimbalom player, Balázs Unger, noticed him and introduced him to the cimbalom, becoming his first teacher. In 2016, he won the “Fölszállott a Páva,” Hungarian televised talent competition in the Solo and Band Instrumental category. He studies cimbalom at the Rajkó-Talent School of Dance and Music. His current teacher is the world-famous cimbalom artist, Miklós Lukács.

The band is thoroughly familiar with the dance cycle of each Hungarian region. Their program will mainly feature music from Kalotaszeg, Felcsík, Bonchida, Gömör, Bogyiszló, Ádámos and Szászcsávás. The members of the band have toured these regions and have had personal experience and exchanges with the musicians there.

There is a lot of interest in Sarjú Banda’s tour. Together with dancers Diána Santana Cadena and István Berecz, it promises to be a memorable experience for the artists and audiences alike.