Krisztina Tar was born in Debrecen on February 11, 1988. In 2010, she helped as an interpreter at the Csángo Fesztivál in Jászbereny to a dance group from Chile with whom she developed a close friendship. After she visited Chile, she decided to move there permanently. We chose to interview Krisztina because the most recently developed Hungarian Folk Dance group in South America, The Duna Táncegyüttes in Santiago de Chile, was founded by her in 2016. Her devotion to the work and love for the community and folk dance does a lot to make Hungarian dances more popular in South America, even in a country, where, so far, the Hungarian dance house movement had not been present. We can say that there is music and people who feel and do Hungarian dance in Santiago de Chile. So, let’s get to know Kriszti.

I Dance Hungary: Where were you first acquainted with Hungarian Dances?

Tar Krisztina: My mother had always been a big fan of Hungarian folk music. I have memories from my early childhood of listening to the records of Sebö and Muzsikás. Growing up in Debrecen, I was surrounded with folk dance because in this city there is a very deep tradition and there are very good folk dance groups. I was four years old when my mother took me to Hajdú Táncegyuttes and they told me that I was too little to start dancing and I had to wait a year before joining the group. After that year, I joined the group and we can say that it was love at first sight. In 1998, I joined the Debrecen Néptáncegyuttes where we can say that I grew up. During my university years, I danced in the Csepel Táncegyüttes and the Corvinus Néptáncegyuttes. I never stopped dancing and it is an imminent part of my life including since 2016, as an instructor and a leader of a dance group. 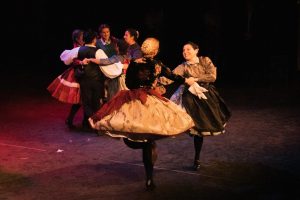 Was there a moment where you felt that dance feels more to you than just a hobby?

Of course! Dance, from first sight, has always been more than a hobby. I have quite a lot of hobbies, but dance is a lifestyle. This is, maybe, the only thing that without it no day can pass. It is part of my everyday life. When I don’t have the chance to dance myself, then I watch videos or at least I listen to folk music. 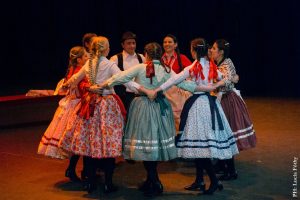 How did the idea come to launch the Duna Együttes in Chile?

I came to Chile in 2011, and even though I loved the country very much, I missed dancing more and more. I started to learn some different types of Chilean and Latin dances, but it was not the same. At the time, the Hungarian community was not very active, and there was no Hungarian Embassy, so I had practically no connection to Hungarians. The turning point came in 2014, when the Hungarian Embassy was opened, and so there were many Hungarians. So I brought the idea to the local community leaders to start dance rehearsals. But, I didn’t really receive any kind of action from them. In the beginning of 2016, there was a diplomatic delegation coming from Hungary and through them I was given information about the Körösi Csoma Sándor program. I applied and I was lucky to get involved as a scholarship barer in Chile. My first task was launching the folk dance group. It was a big undertaking because I hadn’t really anticipated how successful it would be. I didn’t know if anyone would join. But to my great surprise, a good many people came and the rehearsals were successful. I was very nervous at the beginning because I had never taught dancing before, I was always a dancer, but never a teacher. But, I guess, with time, I began to pick it up. I am sure my dancers can give a better reflection on my skills as a teacher. As time went by, a stable group formed and the enthusiasm was growing consistently. I saw that they also wanted to dance in long runs, as I did. We set different goals ahead of us and planned some serious programs. So that is how the name came, Duna Táncegyüttes, we designed a logo, we organized dance houses, and our first choreography was created. In 2017, we were asked to perform at an August 20th event, at which time we realized that we did not have any Hungarian Folk costuming. I had a proper sewing machine but I could not use it. Luckily, one of our dancers, Kati, could sew, but she did not know how to sew a folk dress. We had two weeks to make 10 Szatmári folk costumes, and we did it! We were very proud of ourselves. Although, in retrospect, those costumes could have been improved in many ways. So, with time, we tried to improve the costumes. We put a lot of effort into it and achieved a lot of progress in this respect. We soon overcame the initial difficulties, and since then, our folk group functions very well. We perform in many different places, we had folk camps, and we were abroad in Argentina and Uruguay. In 2019, we became and official institution which has broadened our opportunities. 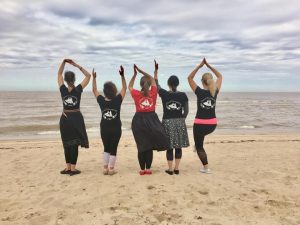 What is your most dearest memory with dances and dance houses?

I have a lot of beautiful memories. 28 years in various festivals, performances, camps. I met many, many very wonderful and talented people. So, I guess, I wouldn’t name one really precise memory, but, what I have received through dance in my life, when you are a member of a dance group, of a community, that constantly forms you. It teaches you how to deal with other people, how to compromise with other people, and also gives you a sense of community. For me, personally, the group was my second family. And here in Chile it is the same with the girls. We discuss everything, not only dance, and we do everything together. 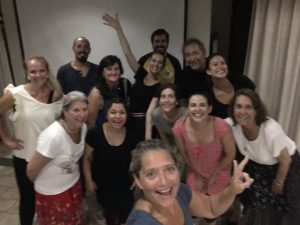 What do you feel in South America when you meet other dancers from other countries?

It’s a fantastic feeling. These are the moments when I feel that it doesn’t matter that I am 12000 kilometers from Hungary, I still feel like I am home. I will never forget the first moment I personally met the South American groups. It was July, 2018 when we arrived in Buenos Aires, to the South American Hungarian Dance Meeting, we were very late, and we managed to get to the headquarters of the local Hungarian community at 1 in the morning. My jaw literally fell because of how moved I was and I had to try to keep myself from crying. I entered the doors of Hungária and I saw the Dűvő group playing music there were around 150 people dancing Mezőségi dances. It was beautiful and moving at the same time.

In your opinion, what are the characteristics of the Dance house movement in South America?

What I like most and what catches my attention in the Dance house movement in South America is that there is no competition here, there are no awards. This absolutely preserves the purity and innocence of the groups. The main role is that of the community, the time spent together, and the atmosphere. Everyone learns from everyone and you don’t go to the stage concentrating on winning an award. This gives a completely gives another color and taste to the movement. Apart from that, I see that in each and every group, there is very serious work going on. It doesn’t feel that the distance from Hungary creates any sort of difficulty.

Which is your favorite dance, song, and why?

What would you suggest to the dancers of the world and to those Hungarians living in areas without a folkdance group, but maybe thinking about fostering a folkdance activity? 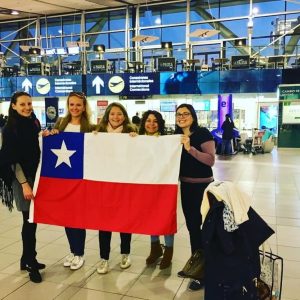