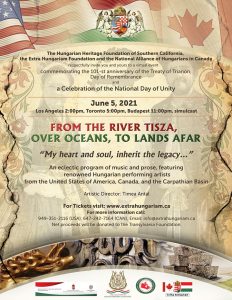 This year’s commemoration on the 101st anniversary of the Trianon treaty has been jointly organized by Hungarians from the United States, Canada, and Hungary. On July 5, Hungarians from all around the world had the opportunity to join in on the online event that presented a rich cultural experience. The occasion began with the ceremonial speech of Árpád János Potápi, Secretary of State for National Policy in Hungary.

Through the outstanding performances of well-known Hungarian musicians and musical bands, such as ‘EDDA Művek’, ‘Ismerős arcok’, Imre Vadkerti, Koppány Kovács, and numerous American and Canadian pianists, cellists, actors, and reciters, participants had the chance to experience a truly exciting and diverse program. Overall, 85 performers expressed their patriotism and showed the importance of national identity.