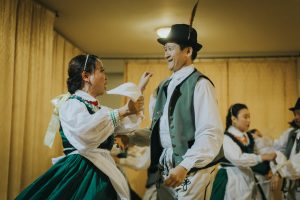 Mr Patrick Kuo and Ms Maya Chen are the married couple from Taiwan who started to love Hungarian folk dances after they went to California, US to participate in the Stockton Folk Dance Camp in 1995.  Patrick and Maya have both been the chairman and chairlady of Oro Folkdancers in Taipei and they have been teaching and performing Hungarian dances since late 90s.  Patrick is also a senior member of the Magyar Folklore Club, a Hungarian dance performing team founded by a group of energetic male dancers in Hsinchu, Taiwan in early 2000.

In 2004, 2007, 2015, 2017 and 2018, Patrick and Maya together with their Taiwanese team members had been invited by Mr Kenneth Tse, leader of the Knack Cordial Folk Group to perform mainly Hungarian and other Eastern European folk dances in Hong Kong.  On 11 Nov 2017, Patrick and Maya led the dancers from Oro to perform Hungarian dances in the “Népdalok – Hungarian Folk Singing Concert” hosted by the professional Hungarian artists, Ms Júlia Kubinyi and the folk band, Hungarian FolkEmbassy at park No 4 Auditorium, Taipei.

In Jul 2018, Patrick and Maya joined the performance team, Napkelettől Napnyugatig with 40 dancers from Taiwan, Hong Kong, Japan and Malaysia to perform Hungarian dances in Hungary, Slovakia, Austria and Romania. During the 2 weeks of the 2018 Europe performance tour, they believed the most memorable and enjoyable performance for them was the first show at Guta, Slovakia where they were mostly fascinated and deeply touched by the whole-heartedly greetings and appreciation from the Hungarian audiences and inhabitants from several villages in the vicinity. They also fell in love with and were proud to be taken part in the flash mob performance for performing a 14 minutes’ dance suite from Kalotaszeg at Halászbástya, the Buda Castle in Budapest, Hungary on 25 Jul 2018. 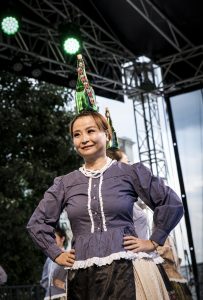 Patrick and Maya had performed many Hungarian and Transylvanian dance choreographies compiled by Mr Kenneth Tse including dance suites from Somogy, Délalföld, Sárköz, Kisküküllőment, Kalotaszeg, Mezőség, Sóvidék, Marossárpatak and Örkő etc.  Patrick and Maya have been steady dance partners in the above dance suites of which they both like the Mezőségi csárdás couple dances very much.

Regarding Hungarian folk music, Patrick prefers the Gyimesi music tunes while Maya’s preferences are the music from respective regions of Mezőség.  Maya was really inspired by the song ‘Repülj madár, repülj’ sung by Ms Sebestyén Márta and out of their sole interests, Patrick and Maya have been learning Hungarian folk songs lately from the Zoom classes in the internet conducted by Ms Zina Bozzay. 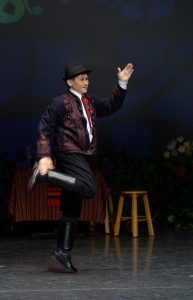 Since 2004, Patrick and Maya had collaborated with Knack Cordial Folk Group (Hong Kong) as one of the lead dance couples to perform Hungarian dances in many places including Taiwan, Hong Kong, China, Hungary, Austria, Slovakia and Romania.  They and over 10 dancers from Taiwan have decided to participate in the next ‘Napkelettől Napnyugatig’ Europe performance tour together with other dancers from Hong Kong, Japan and Malaysia in 2021/22. They also acted as two of the assistant instructors of Kenneth to teach his Hungarian dance choreographies in Taipei during the period from 2017 to 2021.

Patrick and Maya had attended several dance house parties (táncház) conducted by Mr Mihály Rosonczy-Kovács and his band crews in Hong Kong, China, Hungary, Austria and Slovakia in 2017 and 2018 respectively.  Since then, they really love the atmosphere within a táncház in which there are lots of direct interactions and immediate responses among dancers, folk band and the audiences. In the coming future, Patrick and Maya look forward to have similar táncház activities to be arranged in Taiwan.

(with thanks for the text for Kenneth Tse) 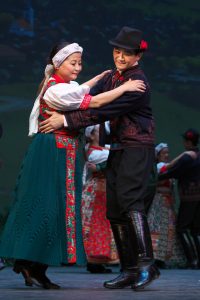