News “Dancing is a form of communication that bridges all borders and distances.”...

“Dancing is a form of communication that bridges all borders and distances.” Meet Kati ‘Zóka’ Zólyomi 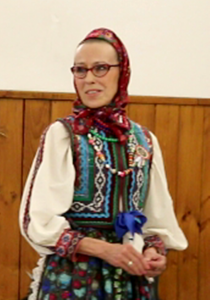 Kati ’Zóka’ Zólyomi was born in Buenos Aires 64 years ago. Throughout her life as an artist, she has enriched the world of Hungarian folk dancing in South America with numerous works of art, theatrical plays and choreographies. Her dances are not solely prepared for folk dance festivals, as she organizes Hungarian events and commemorations at the ‘Hungária’ Hungarian Association in Buenos Aires. From knowing Kati for a very long time, I can say that she does all her work with a conscious Hungarian identity. She has a deep and sometimes unusual approach to things. That is what makes her an artist and that is what makes her a key figure in the world of Hungarian culture in South America. The following interview is based on a dialogue I have had with Kati.

Where have you first encountered Hungarian dances?

In terms of original, real Hungarian folk dancing, my first encounter was during my first visit to Hungary on a heavenly revue of MÁNE (the Hungarian State Folk Ensemble) on the day of my birthday on April 23, 1979. I was sitting in the middle of the room with my cousin. Suddenly everything went dark, and the crowd started cheering, when performers started coming in through the back part of the auditorium’s corridor: two pairs of dancers and a four-member folk band. Only later did I learn that the artists were performing a czardas from Kalotaszeg as the dancers arrived at the stage, where the curtains rolled and the whole dance group showed up performing the same dance (this type of opening was common back then). My head was all over the place, I was shivering and crying. Here, in Argentina, I’ve never seen or heard anything like this before, I have had no previous experience with dances or music from Transylvania, despite dancing for ten years in the Hungarian folk group ‘Regös’ in Buenos Aires, which was clearly not original Hungarian folk dancing.

This experience has led to my ‘rebirth’ and the beginning of my beloved career. It was the turning point for me becoming a folk dancer, a dance teacher, and a choreographer. Naturally my learning experience in the field has been ongoing ever since. This is what I am going to do for the rest of my life.

Has there ever been a moment where you felt that dancing means more for you than a mere hobby?

A hobby?! No way! It has never been that. I’ve taken it very seriously since the beginning and I have always spent a lot of time on it, even to this day. It has developed an immensely human, artistic and performer part in me that there is no turning back from it.

How do you feel when you have the chance to meet with folk dancers in South America and other countries?

I must answer in brief terms. There is a brotherhood between one folk dancer and another. A Hungarian brotherhood. There is probably no other kind of human relationship more precious than this, not a common language more touching than this. It (dancing) is a form of communication that bridges all borders and distances. Though I must emphasize that a South American folk dancer surely knows why they dance. It is for (national and cultural) conservation also. In this field we will never be like folk dancers living in Hungary. This can possibly be a common ground with professional or amateur folk dancers from the detached territories that were formerly part of Hungary.

What is the most beautiful memory you have from your life as a folk dancer?

I have millions of beautiful memories and I use them daily as a source, a reminder, a professional dictionary so that I do not forget who I am. Quite frankly, every single folk dance event, when I can reach my goals with my dancers and I have the opportunity to share it with precious people, that is the peak for me. I have so many memories and pictures of this kind that it would be impossible to only select one. In reality, this type of definition gets richer and transforms as time passes by. The most recent memory of such was two years ago, during the 2018 great South American folk-dance meetup. During one weekend, after two performances, a wonderful period has inevitably concluded: most members of my dance group have finished their lives as dancers (because of age, work or illness related reasons). Back then I thought I could never be more saddened. Despite this, I took a deep breath and half a year after I started a new group, which has temporarily been interrupted by the pandemic.

Could you tell me what the characteristics of the South American movement are? What do you value the most in the region?

Once again, it is hard to give an impartial answer to this question. Our movement is greater than imaginable. We are used to the situation that we must keep going and develop despite the hardships. We were thought to be exemplars, to never lose heart. Even here, at the furthermost diaspora, where there are no incoming human reinforcements, no new wave of emigration. Here we have always solved our problems alone. Yet this is the region that gave birth to the most precious initiatives in the diaspora, in terms of folk dancing or scout groups. Someone once called us ‘wild Argentines’. An interesting ‘fantasy’ surrounds us ever since if there is talk about the opinions and interests of Hungarians. It is quite interesting, brings a smile to my face.

What is your favorite dance and song, and what is the reason behind it?

Ha-ha, that is such a naïve question! So ‘typical’! And that is why I will answer it. First of all, let me make clarify that the folklore heritage of the Carpathian basin is so valuable to me that no matter how simple or forgotten the region, I like it, I research and study it the same way. This, of course, will never end. Returning to the main point, I do have favorites. I would be lying if I said I do not. The main thing is WHY they are my favorites. That is where the essence of it all lies. Because of my family roots I love the northern ‘Palóc’ heritage and that of the ‘Kalotaszeg’ region as a whole. Let me specify: the first one because of its kindness, and the second one because of it’s almost transcendent state of development. Let us just say that it is equally hard to master the simplest as the complicated ones.

What is your message to folk dancers around the world, possibly in the diaspora?

Firstly, it should be widely known (and I’m very proud of it myself, especially nowadays) that the Hungarian folk-dance movement in South America has grown to being a worldwide movement because of the enormous meetups that have been brought to life here. When I originally came up with the idea (with the selfless and loving help of my colleagues), I was almost a child (in 1985). And back then I could not realize how big of an impact this will have on the future. Because we really meet with each other, to speak a common language using dance as a mediator, to preserve our Hungarian identity. We are not competing, instead we are sincerely pleased for each other.

Secondly, I would like to say that our folk dancing tradition is the firmest stronghold of our scattered nation around the world. There is no greater movement than this. It does not exclude anyone, it gets stronger despite all the difficulties, and it also connects us to the most important things in life: patriotism, faith, human behavior and sharing. It teaches us that we cannot live without effort, respect, and devotion. That it is still must be passed down in 2021. With very few exceptions, it (dancing) is still the healthiest, most serious creative work. It is not a hobby! It is not simply a pastime activity. It is our home and our shelter.